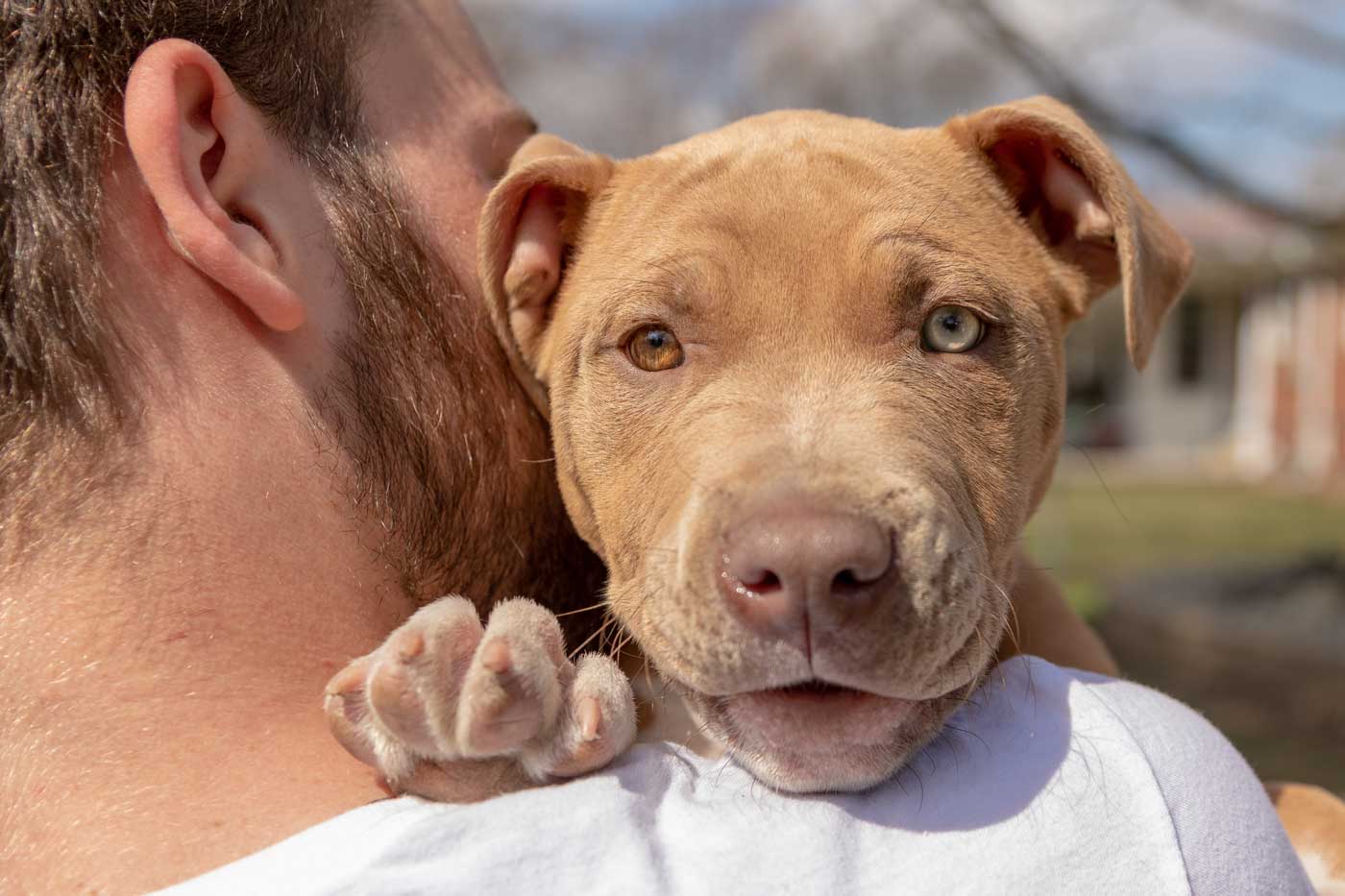 The breed of dog referred to as a “Pitbull” is actually a generic term that describes several different but very similar breeds of dog, in particular Staffordshire Bull Terriers, American Pit bull terriers, and American Staffordshire Bull Terriers. Although the Pitbull has gained a fearsome reputation for aggressive tendencies, the Pit bull breed can be a very loving and affectionate dog, and with the right care and temperament, Pit bulls make excellent pets.

The Pitbull breed of dog was originally developed by cross breeding terriers and bulldogs. They were designed to be an all-round working farm dog, capable of working with cattle and pigs, but thanks to their physical strength and fearless tenacity, it was not long before they began to be used as fighting dogs.

However, prior to being bred for fighting purposes, the Pitbull was primarily used as a companion and a working dog. Their loving temperament and protective streak made the Pitbull an excellent family dog and many of the early settlers adopted Pit bull type dogs as loyal companions to watch younger children while the rest of the family worked.

Over the years, the Pit bull dog also found fame in television and film, and Petey the Pitbull was a much loved character in the classic show, The Little Rascals. It is also the only breed of dog to have appeared three times on the cover of Life magazine. Since the turn of the twentieth century, Pit bulls have proved their worth as family dogs, military mascots, and farm dogs, and they have also found great success in the show ring.

Many famous people are known to have adopted Pit bulls as their loyal companion, including President Theodore Roosevelt, Fred Astaire, Humphrey Bogart, and Thomas Edison. One famous Pit bull known as Sergeant Stubby was also a decorated canine war hero and regularly appeared as a guest at the White House.

The American Pit Bull was first recognized as a stand alone breed by the United Kennel Club in 1898. They were first bred in England, Ireland and Scotland as working dogs and arrived in the United States with immigrants.

The American Staffordshire terrier is another member of the pit bull breed genre. This dog originated from cross breeding between bulldogs and terriers during the 19th century and was primarily exported to the United States for pit fighting. The American version of the Staffordshire bull terrier was bred to be heavier than the English version and was eventually recognized as a separate breed by the American Kennel Club.

Trending
The Most Inspiring PitBull Hero stories: Will make you believe in the indomitable spirit of PitBulls

In spite of their loyal service to mankind throughout the years, the modern Pit bull has been linked with all kinds of attacks and incidents of aggression and dog fighting. In the vast majority of cases, the dog in question was not even a recognized Pitbull, but because of the media frenzy surrounding so-called “dangerous dogs” such as Pit bulls and Rottweilers, the public now has a tendency to see any dog matching the description of a generic bull terrier and assume it is a Pitbull.

Sadly the reputation of the Pitbull has been irrevocably damaged and it is unlikely to ever recover, but despite its bad reputation, the Pitbull has plenty to offer owners and is probably more versatile than the majority of other dog breeds in existence today. Modern pit bulls are frequently used by law enforcement agencies in drugs and bomb detection and pit bulls are also used by search and rescue teams.

What characteristics does the Pit bull have?

Pit bulls grow to between 46 and 56 centimeters in height and can weigh as much as 50 kilograms. There is a common misconception that the average Pitbull is a huge hulking mass of muscle, but the majority of dogs are not that large since breeders tended to favor smaller dogs for the purposes of fighting.

Trending
The Merle Pitbull: A Unique and Controversial Breed

The Pitbull type of dog is characterized by a barrel shaped, well-sprung chest. They have thick muscular necks and a large wedge shaped head with extremely powerful jaws. Some Pit bull dogs are seen with cropped tails, but this is not an accepted breed standard. Pit bulls are accepted with all coat colors and the coat should be thick, short and shiny.

At first glance, the Pitbull is a powerfully built dog possessed with exceptional strength and power, but this appearance belies a sweet natured temperament with a willingness to do anything for their owners. They are known for their extreme loyalty and can make very good family pets. As a rule, Pit bulls are good natured and very affectionate dogs, and are suited to being a companion or a guard dog.

Their stature and courage makes them popular as guard dogs and they are usually highly protective of their owner and the owner’s property. An intelligent dog, a pit bull is easy to train as they love to please and are very obedient when trained correctly. Under certain circumstances, a Pitbull dog will fight to the death, but their aggression is normally directed at other dogs or animals as opposed to people.

With the correct handling, a Pitbull will be an excellent family pet thanks to their affectionate and loyal natures. They do need regular exercise, but are suitable for apartment living as long as they are walked often enough. They dislike colder temperatures and prefer living in warmer climates.

Pit bulls have a short coat and are easy to take care of. Like all dogs, they benefit from regular grooming with a bristle brush and are happy to take a bath from time to time. They tend not to shed large amounts of hair (unlike some longer haired breeds of dog) and they will not require clipping of the coat to keep it in check. The average life expectancy of a Pit bull is approximately twelve years.

Many people who are unfamiliar with the pit bull breed of dog are often surprised by the affectionate and loving nature of these dogs. Pit bulls adore human company and are more than happy to enjoy a cuddle and will even sit on your lap if you can tolerate their weight.

They are sociable dogs and are usually more than happy to meet and greet anyone who enters the home, although if they sense any danger, they will quickly show their protective traits. Unlike some other breeds of dogs, a Pitbull will always choose to be with humans and will not be happy being left alone for extended periods of time. They enjoy company and prefer to be active members of the family, which makes them more suitable for families who are around for the majority of the time.

Human aggressive traits are not specific to fighting breeds, although the media would have us believe exactly that. Any dog can exhibit human aggressive traits and such incidences are often the result of a pack instinct when two or more dogs are left alone with a young child. Like all dogs, Pit bulls must be socialized as young puppies and taught to respect their role in the family hierarchy.

All dogs are pack animals and they are far happier when they understand their place in the “pack”. Most behavioral problems with dogs originate from the dog’s confusion about who is the leader of the pack, and any dog that mistakenly believes it’s place in the family pack is above yours is likely to cause problems.

However, with the correct training, enough exercise and a firm pack leader, a Pitbull will soon become an obedient and placid member of the family. Like all dogs, Pit bulls need to be socialized with other dogs and humans from a young age. They must be taught to show respect to members of the family as well as other dogs, and they must also be kept under control whilst out in public. The correct socialization will help to curb any aggressive tendencies towards other dogs and help to ensure your pet is a happy and well adjusted animal.

But not matter how careful you are, there is always the latent danger your dog will attack another dog whilst out in public. Dogs are like humans: they can develop a dislike for another dog for no good reason, but in the vast majority of cases, dog aggression arises because of food, toys, and hierarchic status in the pack. Any dog is capable of picking a fight, but inevitably some dogs are more likely to start a fight than others.

Don't forget about proper food also and check what are some of the best dog food for Pitbulls.

The danger with owning a Pitbull is that once your dog is attacked or starts a fight, it can very quickly accelerate into a serious problem. Like any other powerful dog, Pit bulls need to be managed carefully and if you have any concerns about the possibility that your dog might show aggression towards others, you need to ensure no harm can be done.

It is important to monitor your dog at all times and be aware of any potential flashpoints. For example, if your Pitbull has exhibited an intense dislike towards a particular type of dog in the past, try and stay well clear of similar dogs when out for your walks and always keep your dog on a leash in a public place to avoid the possibility of any issues occurring.

With the correct socialization, most dog aggression problems can be minimized, but some dogs become less tolerant as they grow older, or even vice versa, so be aware of how your dog is likely to behave at all times, and if necessary, muzzle it in public. As a Pitbull owner, you have to be far more proactive at preventing problems from occurring for no matter who starts the fight, your dog will be blamed. And because of their size and power, a Pit bull will very quickly cause a lot of damage to another dog if allowed to continue fighting.

Unfortunately, because of its reputation for being an aggressive dog, there are some owners who buy a Pitbull purely as an accessory. They encourage their pet to react aggressively towards other dogs and will generally use the dog to intimidate others. Such irresponsible behavior is unfortunate because it does nothing to help improve the public perception of this beautiful breed and although the dog might be a sweet natured animal, there are many critics of the breed who need no excuses to condemn the Pit bull as a “dangerous breed”.

However, contrary to the images portrayed in the media, the Pitbull makes a loyal, affectionate and loving companion and many evaluations of temperament across the breed have consistently shown that the Pitbull just as obedient as other popular family pet breeds such as the Labrador and Golden retriever. Maybe you can read article 7 Reasons Why Does My Dog Follow Me Everywhere and you will see this bond between you and your dog. Some So never be discouraged by the breed’s reputation, as with the right treatment, the Pitbull is more than capable of becoming a fantastic addition to any family home.

The Gotti Pitbull: A Comprehensive Guide