I am sure, whenever you think of Pitbull, you think of a bulky giant of a dog who is only suitable for blood sports. But do you know some of the huge Pitbull have the funniest names that you can’t actually relate to with the breed itself, considering the fact that these magnificent dogs have very bossy and sophisticated features? Read about other Pitbull facts here.
Let us introduce you to the world's cutest and funniest named but powerful, rare, and giant Pitbull breeds that you might not have heard of.
Here is the list of Giant Pitbull breeds we will cover in this article. But yes, these are not the only giant pits, but we think these are the greatest. 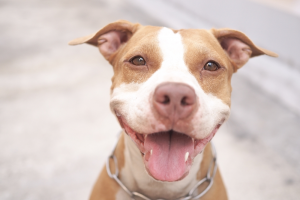 Although very popular, this breed of rare Pitbull is not seen often. Their caring nature makes them the best caretaker of the children so you don’t have to worry when you’re planning to get a nanny dog for the family. Only, you’ve to train them to adjust to the family. In the late 18 century, bulldogs were bred with terriers to create the mighty blood sports dog breed that could be used for bear and bull baiting. What came out as a result of the breeding was a huge Pitbull breed full of life and character.

With Englishmen coming to America, they decided to bring the red-nose rare Pitbull along but not as fighters but as nurturers and caretakers. Although American Kennel Club does not recognize the breed, United Kennel Club does, so make sure you get registered with them once you adopt of cute little red-nose Pitbull pup. These babies have uniquely colored red-brown noses, eyes, lips, and toenails. Their coat is usually of copper color but some can have white patches too in the coat. This rare Pitbull loves cuddles and they love to be by your side always.

So if you plan to own a lap dog who loves to stick by you all the time, go for a red-nose Pitbull. Although the breed is expensive, their addition to the family is always great because they love families so much that they can develop separation anxiety if they won’t find you around. The maximum time they can tolerate being separated is 3 to 4 hours! So, they crave companionship as much as you want. Adopt one right away if you want tones of love licks and warm cuddles. 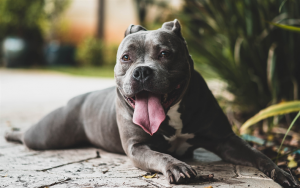 Most of the time the blue-nose Pitbulls are either American Pitbull Terrier or American Staffordshire Terrier, or are the result of the breeding between these two breeds of giant Pitbull. Surprisingly this nose color is not natural but accidental and the color is not purely blue but grey with hues of blue in it. The funny part is despite the name, blue nose Pitbull can have black, blue, red, or grey noses too. The coloration of the noses is due to the phenotypes so nothing abnormal about it.

Trending
The Most Inspiring PitBull Hero stories: Will make you believe in the indomitable spirit of PitBulls

This extremely affectionate big Pitbull breed is often misunderstood, but the reality is they love to be affectionate and friendly. It is not easier to get them mingled with other dogs in the house because they are very possessive about their owners. So, if you are up for a dog that cannot tolerate sharing, a blue-nose Pitbull is your type. Just bear in mind that this extremely friendly companion enjoys an active lifestyle and requires a lot of training and love to keep him happy and healthy.

Are you thinking to change your career or just need some side income? Then you need to see the 6 Best Jobs for Animal Lovers list.

Okay, the heading might be misleading to many but this breed of huge Pitbull got its badass name from the fact that they often have a patch of brown on their eye just like cows have. The moo moo pits are the cutest breed and are the most loved and sought breed of the giant Pitbull. Moo moo Pitbulls are rare and they are part of the white Pitbull breed.

These rather intimidating yet powerful giants Pitbull is strong and powerful – just check these 50 Pitbull facts and you'll see. The male weighs 40 to 60 pounds whereas the female weighs 35 to 50 pounds! Pretty bulky, no? Even the eyes of this beautiful breed of huge Pitbull have vast variation, they can be of warm and glowing amber color or sharp and bleak red color. If you’re planning to own a moo moo Pitbull be very careful because you are adding a lot of responsibility on yourself.

Trending
The Merle Pitbull: A Unique and Controversial Breed

They need a very active lifestyle, so once a day exercise is a must. They have temperamental issues, therefore never punish them by leaving them alone, it will affect them negatively long term. Moo moo pits are great with children so keeping them as pets is safe if you’ve trained them well. The only issue is that they get allergic to sunlight, therefore it is recommended to avoid taking them into direct sunlight. Go get yours now if you are ready to be responsible enough to take care of one.

Ever wish to own a dog that has a lot of love to give and is very protective towards you and your family? Well, if you did wish that then you should adopt a Gottiline Pitbull right away. Although this giant Pitbull is not a very old breed, hulks know how to make a home in your heart. Stocky and bulky, these cuddle bugs are the protectors, the ultimate guard dog one can wish for.

Gottyline or Gotti Pitbulls as they are called are the most famous huge Pitbull. They were born at Richard Barajas West Side Kennel. The first baby was known as the Notorious Juan Gotty. That was just the beginning, after that this giant Pitbull gave many gems like Colden’s Blue Rhino, Do Good Big Boy, and New Trojan’s Dillinger.

These babies are easier to identify because they look shorter and heavier and their heads are way too huge. It is more like a block. The muscular, broad chest and neck are other features that define this beautiful giant Pitbull. Their jawline, defined and sharp, gives them an appearance of a strong huge Pitbull breed. Known for their good temperament, Gottys are a good addition to any family who likes to treat their dogs right. Go get yours now and don’t forget to get them registered😊 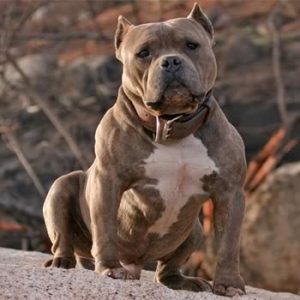 Often, we see the kinds of giant Pitbull that make us uneasy because of their gigantic personality and we start judging them as dangerous huge Pitbull. But contrary to the popular belief, most huge Pitbulls are mild and gentle and they get along great with the family who has kids at home.

One such huge Pitbull is the Razors Edge Pitbull. While they look way too dangerous, they have very gentle and warm personalities. But this behavior is dependent upon the fact of how they are bred. Irresponsible breeding can lead to disastrous results, including the health problems that can arise with it.

Usually the cross between Mastiff of American Pitbull and other game show dogs, this dog is different from the other rare Pitbulls. In that, they are not used as fighting dogs, if anything, they make the best companion dogs.

If you feel lonely and need a giant hulk in your life who can remain loyal to you forever, then you should immediately invest in this handsome giant Pitbull. Trust me, you won’t be disappointed.

The Gotti Pitbull: A Comprehensive Guide